Click me!
Please use Firefox if you're on iOS
(Mobile Safari is bugged)

Interactive Pumpkin is a simple Halloween-themed interactive piece coded through p5.js. It features a cartoon Jack-O-Lantern that lights up when you click on it.

The colours I've chosen for this piece was referenced off a previous artwork that I've done for Halloween in 2020. That artwork involved a similar Jack-O-Lantern that was animated to light up. 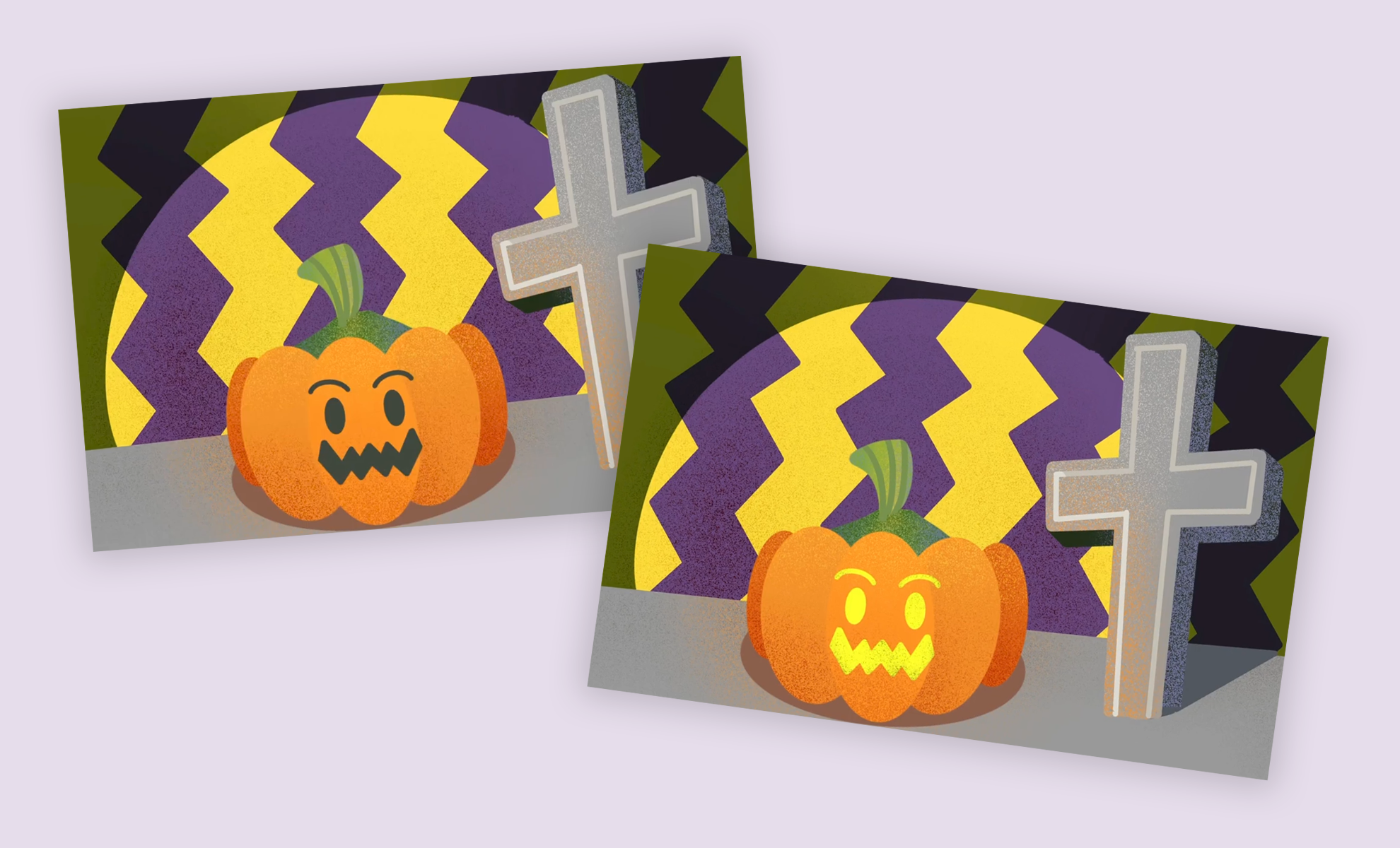 Image of my 2020 Halloween illustration.

Before I started coding the illustration in p5.js, I did some mindmapping and sketches to see what stylistic choices were most viable. My original pumpkin drawing had too many edges on the mouth of the Jack-O-Lantern. It also had an irregular bezier shape for the stem of the pumpkin, which made it difficult to recreate in p5.js.

I decided that I needed to simplify elements of the illustration to make it more efficient. This meant using mainly plain ovals, rounded rectangles, circles and triangles.

Scanned sketchnotes of my iteration process.

Not a lot of research was required for this piece since it was simple and straightforward. I did however, use the p5.js reference page to achieve the final result. The reason why I went for the Jack-O-Lantern graphic was because it was a class exercise which took place around mid October.

In the process of creating the triangular mouth and thunderbolt background, I had to add an extra line of code which showed where the cursor was on screen (with x and y coordinates).

In order to embed the p5.js canvas onto this page, I had to import the libraries into my IDE (VSCode) to make it local, since the iframe embed from p5.js's web editor requires a https secure connection to function (UTS's student servers aren't https secured).

Tim Rodenbröker's Youtube video helped since Sam Lavigne's p5.vscode extension made it easy to set up a new p5.js canvas where I can copy and paste the code I've made in the web editor. I embedded the canvas using a local iframe.

Unfortunately, embedding the p5.js canvas in an iframe seems to have problems with interaction for iOS devices using Safari.

Screenshots of the complete Jack-o-Lantern before and after a click interaction.

If you're on iOS Safari and don't want to install Firefox for iOS, feel free to open the original p5.js project here:
editor.p5js.org/tsz.w.pang/full/V5tOCsPOZ